Disporting Stepwise to Create a Gaming App Like HQ Trivia

Get your app looking all glammed up with these essential features to make it a gaming app like HQ trivia!
Share this Blog
Table of Contents

While (1) Market Research, (2) Strategic Marketing, (3) Intuitive User Experience, (4) Defect Testing, (5) Feedback System, (6) Customization, (7) Simplicity, (8) Social Media Share-ability, (9)Elimination of Clicks, (10) Analytics are some essential features required within every mobile application,  if the process is not directed properly, it might become a complete crapshoot and might not lead to anticipated results. It is easy to develop a solution if the idea is perceived in the right way.

Apps like HQ Trivia works on a simple principle – Players have to participate in a no-cost daily trivia games through which they can win outright or split the prize money. The difficulty level of questions keeps on increasing.

What Does HQ Stand For in HQ Trivia App

HQ stands for Hype Quiz in HQ Trivia, however, this is not an official answer (not even according to co-founder Rus Yusupov). But HQ host Scott Rogowsky chimes that it could be anything that is perceived at the moment – something like “Hard Questions” etc. But he quickly revealed weeks later (February 2018) that HQ stands for “Humpbacked Quail”.

How Does HQ Trivia App Works

HQ Trivia app is one of the most popular iPhone games in the world (counted amongst top 50 games on App Store). It looks more like a game show than an app, with thousands of people competing against each other to win real money. 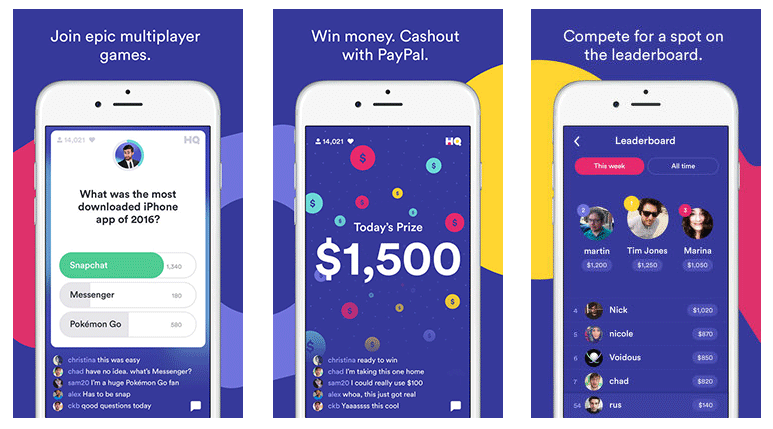 It is a mix of technology, efforts, imagination, business sense, continuous practice and expertise to set up live interactive formats like HQ Trivia app. Not every step is going to be a hit, neither failure is going to be the final destination. There is no such thing as failure. There are feedbacks and it is how you deal with it that will ultimately define the success of your next step in app development. It is as well important to prepare grounds for audience experience on a massive scale.

Some technical points need to be considered if you are thinking of making your own version of HQ Trivia app.

How Does HQ Trivia Make Money

HQ Trivia App founders make money by advertising with likes of big brand names like Warner Bros and Nike etc. Games are often sponsored by celebrities who wish to earn name and fame and want to publicize their films. Also, some investors take it as risky. If costs are to be considered, this might keep earning moderate profits, but a strong basis or permanent source of income needs to be figured out.

This app is equally famous amongst iOS and Android users. Users must ensure that they keep their push notifications on so that they might never have to miss an offer, miss live show and get a chance to make money. Friends can be invited to join into the fun and if they use your referral codes, more extra lives can be earned. Many celebrities are associated with apps like HQ Trivia like – Robert De Niro, The Rock, Gordon Ramsay, Alicia Silverstone etc and it’s been featured in The Today Show, CNBC, Time, The New York Times, and many more. It is going to be the future of television in coming times! Get acknowledged about how to make an app like HQ Trivia. Get a free quote now!