How Do Sequencers Like React Native vs Flutter vs Ionic vs NativeScript fare-thee-well as Compared to PWA?

How react-native differs from flutter? What is it that distinguishes ionic from NativeScript? Is creating react native app similar to developing progressive web apps?
Share this Blog
CONTENT TABLE

Life without mobile phones looks unimaginable and now these are the sine qua non for every individual. Android and iOS development have converted the way an individual or an organization does its business. There is always incertitude as to what a customer must be offered – a mobile app with a superlative user interface (UI), an outstanding user experience (UX) or apps that are compatible with multiple platforms (Android and iOS) and are much faster to develop in the first instance. Ascertain the product of sequencers:

What are Flutter, React Native, NativeScript, and Ionic?

Flutter is a mobile app SDK designed by Google, helpful in building high-quality native applications on iOS and Android. A mobile app is useful and recognizable only when it is backed by beautiful design, smooth animations, and great performance. Developers also have to consider some of the quintessential features to make the app usable without compromising on the performance or quality. Keeping this in mind, Google considered Flutter. It is a mobile UI framework to provide a fast and expressive way for developers to build native applications of iOS and Android. This is because apps and interfaces made up of Flutter are made from a single codebase that is compiled directly with native on code that makes use of the GPU and access platform API and services.  It helps in developing quick applications, expressive and flexible UI (custom design) and native apps for iOS and Android.

Flutter is made up of widgets. It works in a modern react style framework, 2D rendering engine and various developmental tools.

Targeted at building hybrid mobile apps, Ionic is an HTML5 mobile app development framework. Hybrid applications are essentially small websites that run in the browser shell in an app having an access to the native platform layer. Moreover, Ionic is a front-end UI framework and acts as Bootstrap for native, having support for a wide range of common native mobile components, design and animations.

How does Ionic Work?

Ionic comes with a very native style mobile UI element and layouts that comes with a native SDK on iOS or Android but didn’t exist before on the web. It gives one of the most powerful webs applications that eclipse existing HTML5 development framework. It requires a native wrapper like Cordova or PhoneGap in order to run as a native app since Ionic is an HTML5 framework.

Ionic was built keeping in mind that HTML will rule the browser, web and mobile applications. Ionic apps are built to run on low-level browser shells like iOS’ UIWebView or Android’s WebView and are wrapped by tools like PhoneGap or Cordova.

With Ionic, we are building a self-contained application experience with web pages with HTML, CSS, and JavaScript running at the core.

What is React Native?

It’s  an open-source mobile app framework created by Facebook. How is it possible to use React in a mobile environment? In case backend and iOS version are being updated by developers and Android code could not be used for it, then there are chances that iOS users are not able to use the features that Android users are using. With additional bandwidth issues that occur if simultaneously three platforms have to be updated, writing the entire application all over again seems the only option.

A web app that is there as an icon and a loader for webpage does not offer a same native feel as a proper native application and even does not work without a network connection. And if you require more functionality than a normal web page could offer like the integration of camera etc., it is better to look for frameworks that offer to write applications for the most popular mobile platforms like iOS and Android, by making use of the same codebase.

How does React Native work? 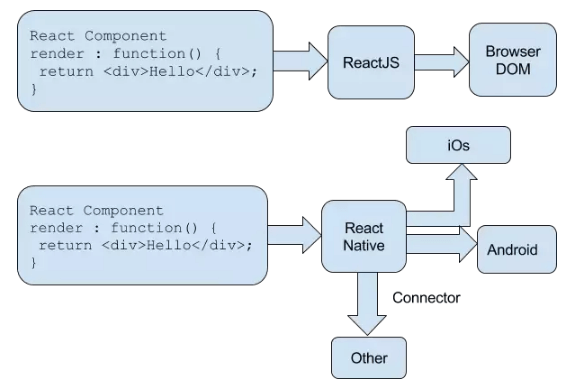 NativeScript is also an open source cross-platform framework. It is used to create 100% native iOS and Android applications.  NativeScript apps can be built by making use of JavaScript, TypeScript or Angular. It has a direct support of Angular or Vue framework. Mobile applications built with NativeScript gives fully native apps making use of same API’s as if they are developed in Android Studio or Xcode. It has native API access with JavaScript, TypeScript or Angular.

How does Native Script work? 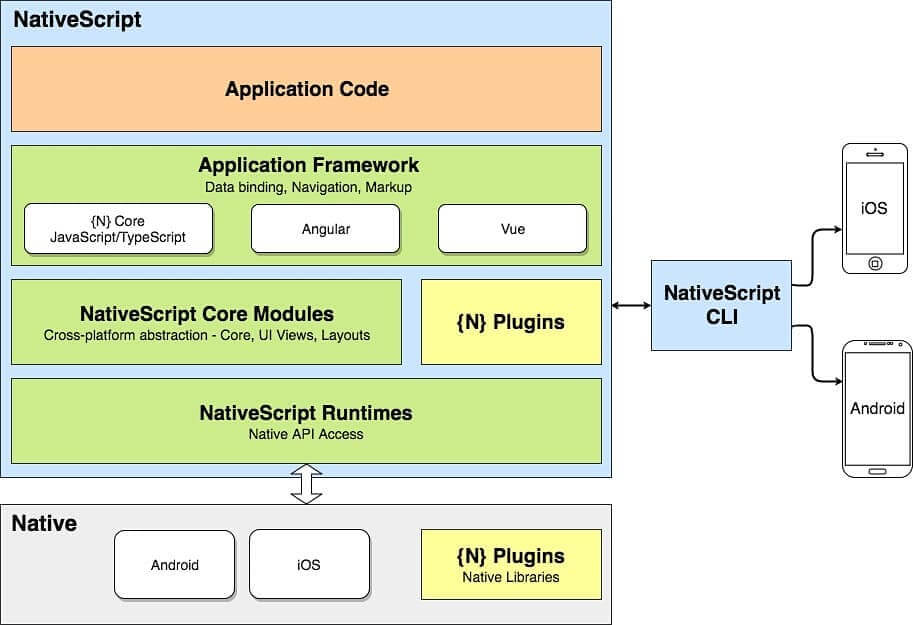 React native makes use of React JS in order to develop cross-platform apps. It makes use of JSX for rendering and is one of the fastest growing networks. It’s easy to get started with any of these options Angular, JavaScript or Typescript. This is the basic reason behind the popularity of NativeScript.

After a brief introduction of React Native, Flutter, Ionic and NativeScript and adding native platform languages like Java/Kotlin for Android, Swift/Objective C for iOS, lets’ find out how do they scale up on single codebase metric:

Write once, use anywhere

How much the code that is written can be used on multiple platforms, the ranking goes like this:

If the same code has to be adjusted in multiple platforms, is there a need to learn different language features, how complex is that adjustment? There is a need to learn just one language for all options like Ionic except in native languages.

Can attractive user interfaces be made easily? There is a need to style a lot of UI elements along with the pre-existing ones. But it’s not always the components adapt to the underlying platform automatically.

Is it easy to add any feature from third-party libraries into your app?

How popular is an option (Ionic, Flutter, React Native, NativeScript)?

How various technologies fare at runtime?

How much access to device features is required on a mobile device? Is it easy to get this access? And is it easy for new features like AR API on iOS and Android?

What is the parity of usage of a technology among global users? They look similar but have slight differences. How do these compare? React Native Vs Flutter, Flutter Vs Ionic, Ionic Vs Native script, Flutter Vs React Native

PWA’s are slightly better than web apps. These are built in a way such that they can run equally well in old browsers. These can fit into all screen sizes with a responsive design. These can work on various browsers and can leverage service workers to enable offline connectivity (HTTPS). It’s convenient to develop a progressive web app as these provide an app-like experience that leverages re-engagement tools such as push notifications etc. PWAs take advantage of new technologies to bring the best of mobile sites and native applications to users. They’re reliable, fast and engaging.

After discussing all these metrics, are you able to select the one that you require for your next app/website? There are two major options – Native apps (Swift, Objective C, and Java) or wrapped apps (Ionic) for a superfast development experience. But if you really care for performance and speed, React Native, Flutter or NativeScript are the ones you should choose for your upcoming app. If none of the above work it’s time for a surprisal – Progressive web apps (PWA). Although PWA’s cannot be really good at accessing device features like GPS, camera, skipping app store/play store, these can still be considered as an additive advantage.

4 responses to “How Do Sequencers Like React Native vs Flutter vs Ionic vs NativeScript fare-thee-well as Compared to PWA?”