Nodejs tops the list of the web development technologies that have emerged and gained popularity recently. The workflow begins as I expand my ideas into the blog!
Share this Blog

After spending two days on research, there is no doubt in my mind about the power that node provides to some of the largest enterprises and organizations. Before node.js originated, developers had to face a dilemma of making use of two separate languages for server-side and client-side scripting.

As an example,  two years back Walmart.com was able to service via Node API’s, resembling the same scenario three months later SamsClub.com (Wal-Mart’s second-biggest property) went 100% JavaScript based. Then iOS and Android experiences were eventually created in React Native (also a JavaScript technology) used to replace native Java/Objective C coding. All these things have further enabled Wal-Mart to reduce time and effort in its daily undertakings.

What Node.js is all about?

Node.js revolves around initializing variables, declaring functions and waiting for the events to occur. Being lightweight and efficient, Node.js is a non-blocking, asynchronous JavaScript runtime that makes use of Google’s V8 JavaScript Engine. It is essentially used for developing applications that can be used to run both on the client side and server side, benefit from lack of context switching and re-usability of code. Node.js is useful in creating fast and scalable network applications and is also capable of handling a huge number of simultaneous connections which increases throughput and enhances scalability.

It is one such programming language that can be used to develop both the front-end as well as back-end solutions. It is also one of the popular choices for building enterprise applications. Its versatility, agility, and performance is the reason that makes Node.js developers one of the most sought-after people in app development.

Which applications normally make use of Node.js?

Examples of some applications based on Nodejs:

Frameworks, Tools, and Libraries most prevalent these days


Node.js has shown a steady rise recently. A lot of frameworks have been developed around.

A framework allows developers to grow and uplift their applications. App developers usually work upon the frameworks that are favored by clients as they automate repetitive processes, making use of common libraries and templates and simultaneously integrating reusable components. As the list of Node.js frameworks is quite long, and with the growing popularity of JavaScript, developers have to be experts in the ones that promise wholesome returns and are widely prevalent.

How to select the Node.js framework for development?

Making the right choice of node.js framework for development is crucial. The points that must be considered while selecting the framework are the type of project and specifics of the project that can be matched up with each of the frameworks.  Some other determining factors are:

Every framework is designed to ease off the development process and enhance the performance of the application.

No, node.js and Php are quite different. While both of these are server-side technologies, differences emerge while we try to compare PHP back-end and JavaScript enabled backend. PHP has its own complexities, but node.js does not wait for the process to get over. It is totally event driven; if a process takes time to complete it will not wait until the code is explicitly written to wait. Node.js automatically picks another task and moves on.

What skills must a node.js developer possess?

What experience of required in a node.js developer?

What is the cost to hire a nodejs developer? 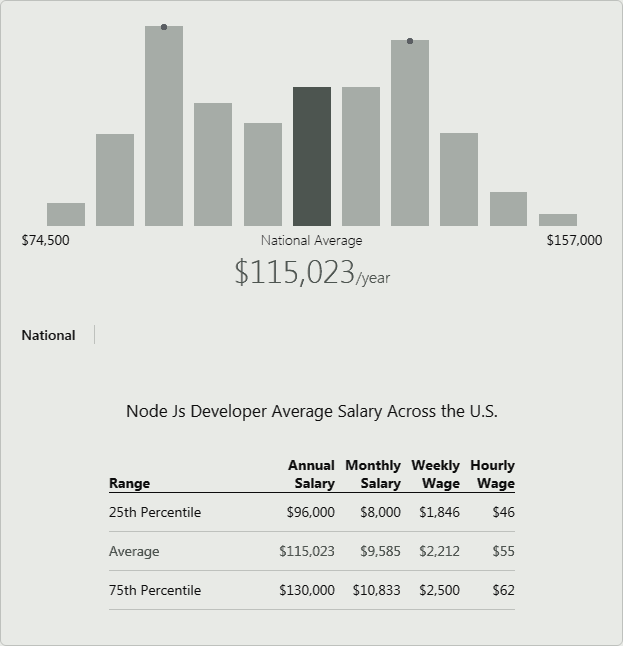 The Evidence is Conclusive

Aptly called as lingua franca of server-side programming, nodejs applications work wonders for those who wish to develop client and server-side applications with the same language. It proves to be highly productive in creating APIs and handling requests, it allows developers to avail best of performance, scalability, and speed in building back-ends. Being the fastest evolving JavaScript technology that offers advanced resources in front and back-end programming for real-time web applications, Nodejs developers are turning out to be the most coveted resources for app development agencies globally.  Look for Nodejs developers beyond your location, let’s work together!

Overall client rating is 4.9 out of 5.0 for Konstant Infosolutions by 2757 clients .