Flutter vs. React Native – A Growing Divergence of Opinion

It's not about how well Flutter defeats React Native or Vice Versa. Read to know how well a framework (Flutter vs React Native) handles a particular scenario in development
Share this Blog

Flutter is a relatively simple framework that is used to design cross-platform mobile applications. Keeping the initial reservations aside, mobile app developers have started believing in what Google claims to give some credence and attempt to build Android applications. Every new development stack brings new dimensions along with it. Development efforts are defined by code clarity, quick iterations, and strong developmental concepts. While both Flutter and React Native give native look and feel, Flutter wins in case of App Performance than its closest counterpart. Since there is no JavaScript bridge for initiating interactions with the device native components; it helps expedite the speed and running time of development. Going further, owing to its industry adoption and experience, React Native manages app development lifecycle in a much better way than Flutter. Here are some conceptual highlights based on my learning experience with Flutter and React Native that will provide you with a basic understanding about the subject.

Mobile users expect their apps to have beautiful designs, smooth animations, and great performance. To deliver on this the developers need to have features faster than ever without compromising on quality or performance. That’s why Flutter was built.

Flutter is Google’s mobile UI framework that provides a fast and expressive way for developers to build native apps on both iOS and Android. This is because apps and interfaces built on Flutter are based on a single codebase, compiled directly than native codes, use the GPU and access platform API’s and services. It is also a primary method of creating applications for Google Fuschia. Flutter is also a mobile app SDK for building high performing, high quality, accurate apps for iOS and Android from a single codebase.

Flutter framework is formed into a series of layers. Each layer is built upon the previous layer. 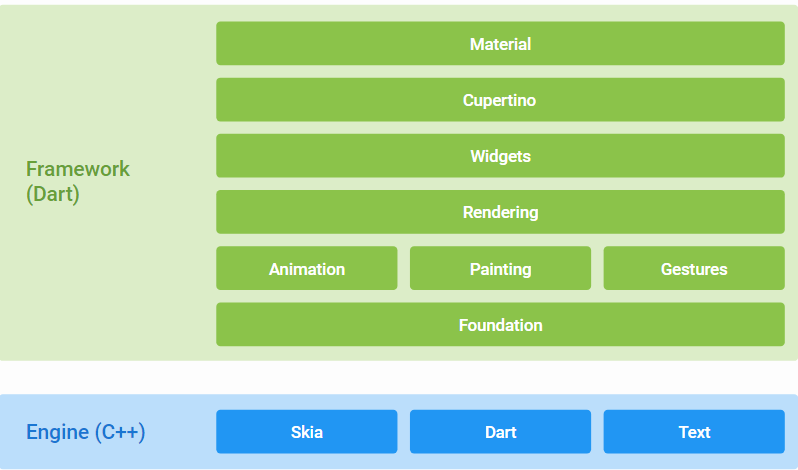 Check the API documentation for all sets of libraries.

Written in Dart, Flutter is a relatively new platform used for developing Android and iOS apps from a single codebase (do more with less code, check Flutter framework above). In addition to writing a lot of plain DART code to model and animate charts, it is capable of handling fairly complex UI that includes animated charts by making use of CLI tools, pre-built widgets, and 2D rendering engine.

Looking to Hybrid mobile app development partner for your project? 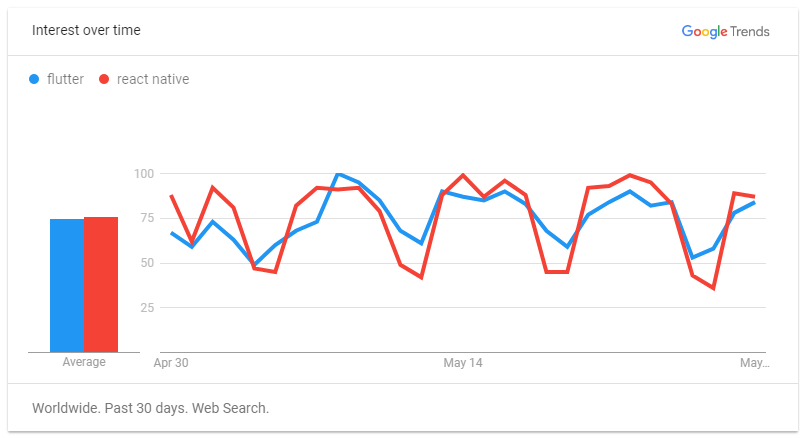 React Native is a JavaScript library utilized for building UI. It is maintained by a community of expert React Native developers and some of the leading corporations, including Facebook and Instagram. It helps mobile app developers to use the same code again in any Android or iOS apps.

React Native is the framework to build native apps. React Native is a library that is built upon React and JavaScript and allows building native mobile apps for iOS and Android that use React and JavaScript to build during development. React we build apps to tailor for Android and iOS but we do not have to write any Java or Swift code and we learn the technology once to build the Android application and to build iOS app. But what React Native isn’t is that it is not an app which provides you with a component library of pre-styled components that look like material to sign on Android or iOS. Instead of this, it gives you building blocks which can be styled on own.

It is easy to build react native apps for both Android and IOS.  Presence of reusable components across Android and iOS makes coding easy. Compared with JS frameworks like Angular JS or Meteor JS, React Native is UI focused that makes it more like a JavaScript library than a framework. The asynchronous JavaScript interactions with the native environment make the resulting UI highly responsive. It offers third-party plugin compatibility, less memory usage, and a smoother experience.

Getting started with React native and Flutter is easy. The code is free and open source. But the real challenge emerges when you need to select between the two. If you know JavaScript and are also familiar with some tools and constructs in React Native library like NodeJS, the CSS Flexbox system, ECMAScript 6, and JSX, a JavaScript syntax extension that’s similar to XML and that is used to display data, React Native appears to be a reliable option for development. Reach out for more.