Technologies like React Native vs Xamarin are cracking the code, becoming aggressive and defiant; leading to big gains in cross-platform app development!
Share this Blog

An average of 6,140 mobile apps is released through the Google Play Store every day, but the decision to select the right development approach is becoming increasingly difficult as there is no clear demarcation between native vs. hybrid approaches, as both these approaches commingle cost-effectiveness and performance. While mobile apps are not only required to reduce costs and device a new form of conversions, these are as well important in increasing user engagement.

Mobile applications are already contributing a lot to global revenue via app stores and in-advertising with the emergence of small and large businesses. This market is going to reach $188.9 billion USD by the year 2020 according to statista.com. (Enclosed Graph) 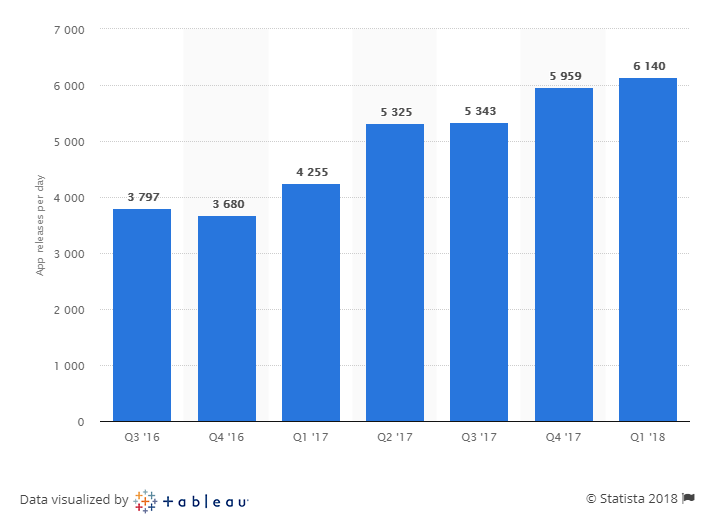 Development Options We Have – Native vs. Hybrid App Development

Users are loaded with lot many applications on their smartphones and the only features they are really concerned about is app performance, usability, navigability, UX/UI and how well it integrates with the mobile OS. React Native comes at a rescue in such a situation. It is the framework that helps create native mobile apps with help of JavaScript. Normal mobile apps are usually programmed using Java (for Android) and Swift/Objective-C (for iOS), but React Native removes this requirement and leads to a completely functional app that can be used on both platforms in much less time and by making use of just one coding language. 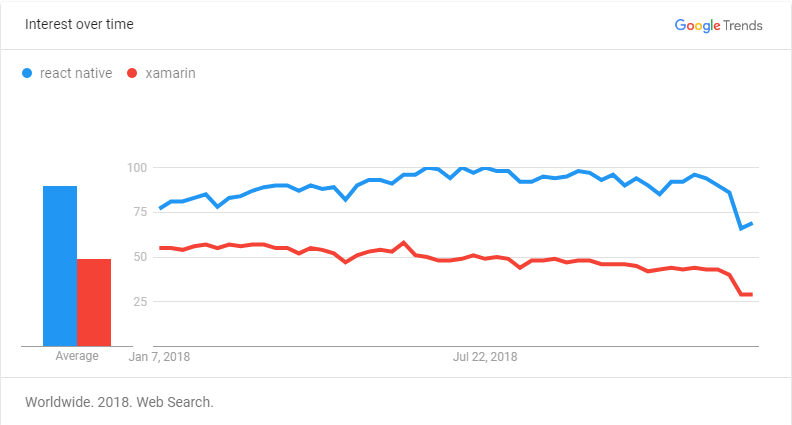 Are you looking for Hybrid app development partner for your project?

Every framework has its own set of pros and cons, therefore, the developers must decide which tools to choose. The cross-platform mobile development follows a classic native approach – One written in Swift or Objective-C for iOS and Java for Android. As the same code has to be written two times for both the platforms, therefore this approach is slightly time-consuming and also turns out to be expensive. With highest code consistency, Xamarin allows engineers to write the code once and apply some parts of it across all platforms. Although this practice might be cost-effective most of the times this happens on the cost of application performance and behavior. Xamarin Developer India has been applying new approaches and tools to mitigate these disadvantages. Although, Xamarin is a widely used cross-platform development solution for mobile, tablet and desktop applications, but React Native outperforms these disadvantages.

Cross-platform mobile development is adorned with the following attributes and cons:

These are not only effective on cost, saves time and can also give developers the flexibility to mix and match best things of various technologies and develop robust applications.

Also read: React Native vs. Ionic: The Bulls Are On A Roll!

As the discussion lengthens, it must be noted that one should not select a development approach because of the technology but must choose it because of its functionality. What if the application is not able to consume all the device features? Then you will have to waste a lot of time and money by adding these features manually. Consider this differentiation:

The Verdict – Relative Positions of React Native vs. Xamarin

Reduced cost, reusable code, faster time-to-market, and native app-like performance are some of the preliminary reasons behind acceptance of cross-platform app development.

The fundamental difference between React Native and Xamarin is for the type of applications that they are used to build. Xamarin makes use of C# and native libraries wrapped in the .NET layer as it is a Microsoft-supported framework for cross-platform mobile app development. Xamarin is efficient enough to be deployed to create multiple mobile apps making use of single code i.e. C#. It helps developers create a comprehensive environment with its powerful IDE where Xamarin Studio and Microsoft Visual Studio can be integrated. Its high compiled code, test suite, options to make use of native UI across various platforms make this platform extensively preferable.

React Native is an open source and free JavaScript framework that uses JavaScript and XML markup (JSX) to develop cross mobile apps that are comparatively similar to native counterparts. Its unique ability to develop native apps for Android and iOS, just like those built with Java, Swift, or Objective-C along with its declarative programming style, virtual DOM concept, and reusable components to speed up mobile app development cycle. Reasons to select react native:

Already have an app in mind? Skip ahead to few of our picks. Would you like a free instant quote? We at Konstant are here for you!

2 responses to “React Native vs. Xamarin: A Comparative Study”